Wrapping up a successful 101st edition of the Pacific National Exhibition, with a double-bill of BC acts, Andrew Allen and Hey Ocean! seemed a great way to bring the Fair to a close.  Starting off the night, a standing room only crowd packed the main stage to hear BC native, Andrew Allen.  Fresh off a months long tour around North America, Andrew came ‘home’ to play his effervescent pop-rock keeping the audience singing and dancing as darkness fell on The Fair.  Months of being on the road certainly hasn’t tired the performer as his boundless, good-natured energy filled the stage. Being on the road with his 3 piece touring band has 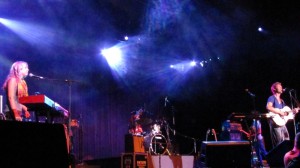 certainly made them a tight group too, sounding perfect throughout the 45 minute set, which included hits “Not Loving You”, “Amazing” and “Loving You Tonight”.
Andrew’s affable stage banter always draws the crowd into his shows and makes everyone feel like they’re at a campfire sing-a-long instead of a concert, which make him the perfect way to cap off a bright sunny day at The Fair.  His willingness to include the audience continued after he left the stage too, standing by the side of the stage for over an hour

signing autographs, taking pictures and chatting with fans. This connection to his fans keep them in his corner as they wait with baited breath for his major label debut album hopefully to be release sometime later this year.